They say blondes have more fun. While I am not sure I agree with that phrase, singer Chris Brown seems to be taking the bleached look for a test run. The singer tweeted a photo of himself today rocking his new golden locks. 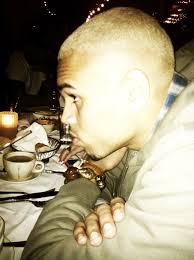 Since posting the tweet, people have started to compare his new look to Sisqo. You know, the "has been" who had that song called "Thong Song." Well, it is hard to tell what Chris looks like simply from this one picture, but I actually think I'm going to go against the grain and say I like this look. Of course I will need to see other pics of it before I make my final judgment, but based off this photo it doesn't look bad to me. We shall see what it looks like as more pictures float to the surface though. But for now, I grant this look...APPROVED. What do you guys think???
:)
Posted by Martina at 3:20 PM