Get it Twisted: Turban Time!

Okay ladies(and gents) I have to confess, I have a new obsession. At the moment  I have an  uncontrollable attraction to turbans. That's right, I have been bitten by the "turban loving" bug. Now that I have yarn braids, I sooooo want to try rocking a turban with them. My only worry is that I will end up looking like I'm tying my hair up for bed instead of looking like a fierce Nubian queen lol. We shall see! I will let you guys know when I try one...and there will be tons of pics. I can't wait to "get it twisted" via a fierce and funky turban.

Anywho, turbans have been creeping into the fashion scene for about a year now. The style has even made it's way onto the runway for major fashion shows and Sarah Jessica Parker (SJP) wore one in the most recent Sex and the City movie. However, I don't think the major fashion shows, SJP, and etc have done the style justice. Please see the horrendous evidence below.


The turban can be a hit or miss. I think SJP, and many of the "trendy" celebs make the trend look silly and costume-like. In my opinion, it looks best (and effortless) on women who already have a certain amount of  chic in a natural and earthy way (if that makes any sense). It's hard to explain, but you have to have a certain essence in order to pull it off. Otherwise, you will end up looking like you are going to a Halloween party. Either that, or a fortune teller at the local fair! And I don't know anyone who wants to look like they are trying too hard. Fashion should accentuate what we have going on naturally. So if you try a turban, and it looks like you are dressed as a character - the look is probably not for you. Here's another example of a turban gone wrong.

But when the turban is done right, it looks breath taking! For example, Solange Knowles has been rocking them for quite some time now and she is one of my personal favs. She makes it look so effortless!  I love her style in general though, and she might be my favorite fashionista at the moment. She can wear the turban with something dressy and conservative or just throw on a pair of blue jeans and a tank top and still make the head wrap look flawless. 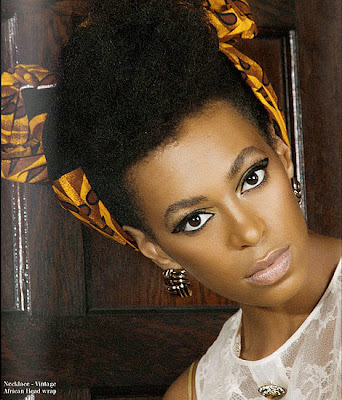 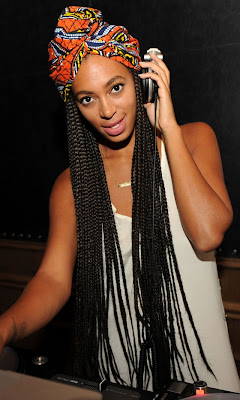 Others who got it right... 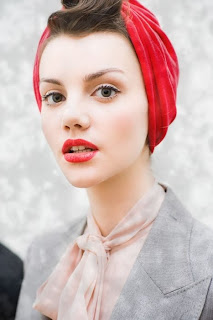 What do you say kinky ladies & gents, is the turban trend hot...or not?
Posted by Martina at 7:59 PM